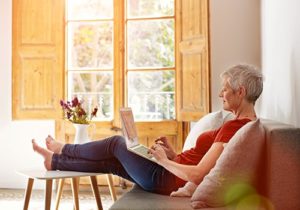 During National Social Security Month, we encourage people to take control of their future with my Social Security. Create a my Social Security account to check your earnings history, confirm you have enough credits to retire, see an estimate of future benefits while still working, or manage your monthly benefits once you begin receiving them. You can also check the status of your claim or appeal, request a replacement Social Security card, and get an instant benefit verification letter.

Our Retirement Estimator is another great tool that provides you with immediate and personalized benefit estimates based on your own earnings record. This allows you to receive the most accurate estimate of your future retirement benefits. Estimate your benefits now.

After you have viewed your earnings history for accuracy, confirmed you have enough work credits to retire, and determined the best age to retire, you can get started on the next phase of your life right away by retiring online! It’s fast and easy on our website.

For more than 80 years, Social Security has changed to meet the needs of our customers. During National Social Security Month, and throughout the year, Social Security puts you in control with secure access to your information anytime, anywhere. From estimating or managing your benefits, requesting a replacement Social Security card, to retiring online, visit SocialSecurity.gov today, and see what you can do online.