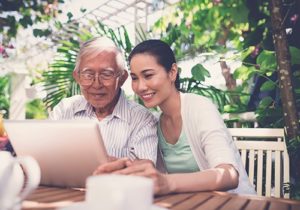 We have all received gifts we’ve wanted to return: ugly socks or sweaters that look exactly like the one you got (or gave!) last year. Sometimes, just letting loved ones know that you’re there for them, no matter what, is the best gift of all. And you avoid the embarrassment of giving an awkward gift! Social Security is also there for you and your family — all year long.

For this holiday season, give your loved ones some peace of mind by introducing them to Social Security’s many programs. While creating new holiday memories, help your family members create a safe and secure my Social Security account at www.socialsecurity.gov/myaccount. It’s the gift that keeps on giving all year long, with features that let you:

Some of us might need extra help because of a disability. We’ve made it easy to apply for disability benefits at www.socialsecurity.gov/applyfordisability.

Additionally, we have resources for family members in the military who have been injured while serving, or are now disabled veterans. They can find out about benefits they may be eligible for at www.socialsecurity.gov/people/veterans.

Your loved ones will also appreciate the gift of convenience! Social Security has many online services that can fit their diverse needs at www.socialsecurity.gov/onlineservices.

Receiving support and friendship often means more than material gifts. As you’re exchanging presents this holiday season, remember to also exchange some knowledge, and pass on the effectiveness of my Social Security and our online services. Your loved ones will appreciate it.