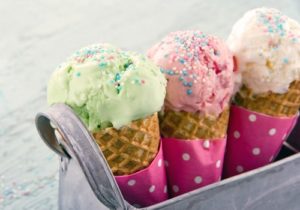 July is National Ice Cream Month. Can everyone say yum?

No matter your favorite flavor, ice cream brings a smile to almost everyone’s face. It’s synonymous with summer and laughter. The sound of an ice cream truck’s instrumental jingle still makes me want to run out of the house and chase it to buy a cone, a shake, or a banana boat.

Like the many flavors you can find in an ice cream shop, our Social Security online services suite offers a variety of services that are easy to access and sure to delight.

With your personal my Social Security account, you can:

If you receive benefits, you can:

We’ll call your personal my Social Security account vanilla because it goes well with everything.

You can also go online and use our Retirement Estimator to estimate your future retirement benefits and plug in different dates to find your perfect retirement day. We’ll call that one chocolate because of the limitless possibilities.

So whatever your favorite ice cream is — hello gelato! — you don’t have to settle for just one flavor. And you don’t have to chase us down. You can visit us at www.socialsecurity.gov and find about all the flavors, I mean services, we offer.

50 thoughts on “Have a Taste of our Many Online Services”