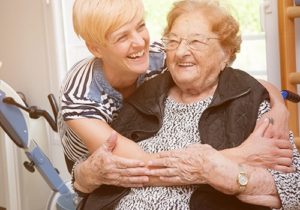 Alzheimer’s takes a devastating toll, not just on those with the disease, but on their families. The effects of this disease, emotional as well as financial, are felt by many in our society. Caring for relatives suffering from this debilitating condition is truly a labor of love, and unfortunately, comes with high costs. This month, as we observe National Family Caregiver Month, we look to shine a light on some of the often overlooked aspects of caring for someone with this disease.

Today, more than 15 million Americans provide unpaid care for more than 5 million people living with Alzheimer’s or other dementias. It is estimated that in 2016 those caregivers delivered 18.2 billion hours of assistance, often at the cost of personal and financial sacrifices, according to a survey by the Alzheimer’s Association for the 2016 Alzheimer’s Disease Facts and Figures. A large percentage of those who are caregivers of someone with Alzheimer’s cut back on their own expenses (including food, transportation and medical care) to pay for dementia-related care of a family member or friend. Many caregivers reduce or quit working to provide care for a loved one, resulting in a loss of income.

Studies show that people age 65 and older survive an average of 4 to 8 years after a diagnosis of Alzheimer’s dementia, and some live as long as 20 years with Alzheimer’s. And with no known prevention, cure, or way to slow the disease’s progression, the impact on our nation and our caregivers continues to grow.

The high cost of Alzheimer’s on caregivers could be even higher; however, Social Security benefits help offset some of those costs of care and services. Traditional health insurance plans and Medicare do not typically cover long-term nursing home stays that people in the late stages of the disease often require. Social Security is used across the country to pay for critical care services for individuals living with dementia.

Since 2010, Social Security has included Early-Onset Alzheimer’s as a Compassionate Allowances condition for the Social Security Disability Insurance program, providing access to expedited review of Social Security benefit applications for those under the age of 65. The Alzheimer’s Association was proud to advocate for this inclusion for its constituents and others affected by this disease.