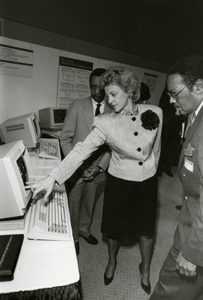 Women pioneers have played a crucial role in leading and shaping the Social Security Administration over its eighty-five year history. From 1935, Social Security helped shatter the proverbial “glass ceiling” by hiring women in a variety of key positions, from staff workers to leadership. In honor of Women’s History Month 2021, I would like to share the inspiring story of Dorcas Hardy, Social Security’s first confirmed female Commissioner.

From the earliest days of her career, Dorcas championed for improved healthcare management. In 1973, then Governor Ronald Reagan rewarded her work when he appointed Dorcas the Assistant Secretary for Health at the California Health and Welfare Agency. Subsequently, on March 20, 1986, President Ronald Reagan nominated Dorcas as the tenth Commissioner of Social Security (COSS). She became the first confirmed female Commissioner in agency history, serving from June 26, 1986 to July 31, 1989.

During her roughly one thousand days as COSS, she was a trailblazer, who spearheaded several significant initiatives, that included the development and launch of the federal government’s first national 1-800 number, the Enumeration at Birth program, Computer Systems Modernization, the agency’s first strategic plan, and the Personal Earnings and Benefits Estimate Statement (PEBES).

The 1-800 number improved customer service by offering beneficiaries an alternative to visiting field offices when seeking general information. The Enumeration at Birth program provided new parents with the convenience to apply for a Social Security Number for their newborn from the comfort of the hospital. With the PEBES program, people could now have their projected benefits mailed to their home.

During her tenure as Commissioner, Dorcas increased public outreach, encouraged computer innovation, and strived to improve customer service to millions of beneficiaries. She was truly a pioneer in Social Security history. She believed strongly in efficiency in government, and said, “The business of government should be businesslike.”

Dorcas stayed very active after her service as COSS. She co-authored a book with her father on improving Social Security, hosted a weekly cable television program, ran a consulting firm, and continued her lifelong work with the Girl Scouts of America. From 2002 to 2016, she served on the Social Security Advisory Board, becoming its longest serving member.

Dorcas Hardy passed away at the age of 73 on November 28, 2019, at her home in Spotsylvania, Virginia. Up to her final few years, she remained deeply devoted to public service and helping others. Her legacy is the millions of lives she touched and improved with her steadfast and pioneering efforts in social insurance and government reform.

Knowledge is Power, and so are our Publications!

Recognizing Those Who Make it All Possible