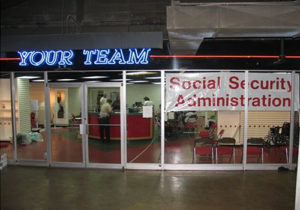 Ten years have passed since Hurricane Katrina, a Category 3 storm more than 400 miles across and with sustained winds of 100-140 miles an hour, made landfall.  The storm devastated the coastal regions of Mississippi, Alabama, and Louisiana.

“We are public servants first.  No one hesitated to volunteer.  Everyone just started doing what they could to help those in need.  That’s what Social Security is about.  It’s who we are.”

Many New Orleans residents evacuated ahead of the hurricane hoping for the best. Those that remained in the city fled to nearby shelters. Rescue teams worked hard to reach others who were trapped and unable to reach safety. A lack of cell phone service and other basic communications infrastructure made staying in contact with loved ones difficult. In the chaos, family members began desperate searches to find missing relatives.

As one of the first organizations to respond to the crisis, the Social Security Administration (SSA), began organizing immediately to meet the needs of those who couldn’t access their benefit check, those who lost their identification documents, or those who tragically lost a loved one in the storm.

SSA transported 171 volunteer employees from across the nation to join those employees who were still serving the public despite many having lost everything in the storm themselves.

SSA quickly established six portable offices in southern Louisiana, in addition to mobile support units charged with providing direct service to those housed in shelters.  Many New Orleans residents were bussed out of the most affected areas of the city to Houston’s Astrodome, where they had access to a variety of government services, including an onsite Social Security office.

Offices from Dallas to Houston, across Louisiana, and Arkansas opened early, closed late, and remained open over the weekend. Social Security employees worked extended hours in the first few weeks after Katrina, as they ensured those who needed service received it.  SSA employees sent hundreds of care packages to those in shelters and brought toys, coloring books, and clothing to distribute to those visiting Social Security’s offices.

Social Security employees are dedicated to serving the public, whether the storm is an unprecedented hurricane or one of the many storms of life.  As one staff member put it, “We are public servants first.  No one hesitated to volunteer.  Everyone just started doing what they could to help those in need.  That’s what Social Security is about.  It’s who we are.”

Your Friend, my Social Security

Another Way to Help You Secure Today and Tomorrow