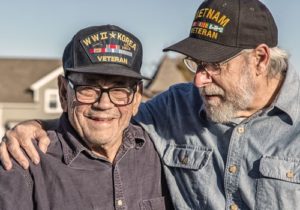 On Veterans Day, we honor the men and women who proudly serve our country. Social Security is committed to helping our veterans. One of our priorities is to constantly improve the quality of service we provide to them and their families.

Here are five Social Security benefits every veteran should know about:

Acting Commissioner Nancy A. Berryhill said it best: “We honor and thank the brave men and women who served in our nation’s armed forces.” Let us always remember their courage and sacrifice.